My oh-so-lovely publisher, Black Inc, agreed to send me to Melbourne for the CBCA award announcements. It was so fantastic to be there in person…and even more fantastic for Nona & Me to be announced as as HONOUR BOOK for Older Readers in 2015! Here is a blurry photo (because I’m sure that’s just what you wanted to see!): 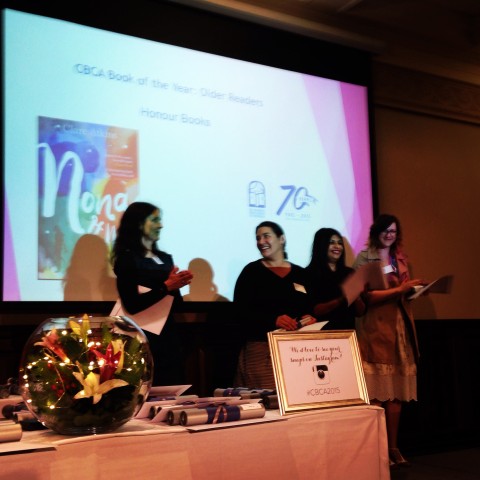 And a slightly less blurry photo with Claire Zorn (the winner for The Protected) and fellow shortlister Melissa Keil (for The Incredible Adventures of Cinnamon Girl)…what’s that? Is Claire a bit taller than us? Um…just a little bit… 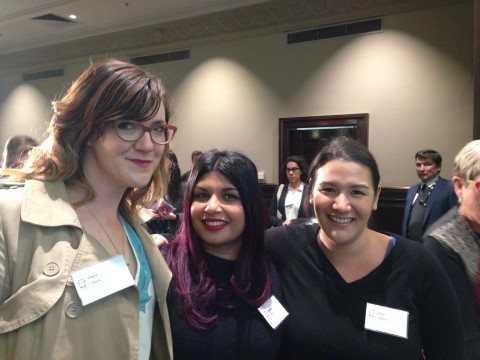 Claire made a very touching award acceptance speech about not fitting in at highschool, but also about the academic pressures placed on students today and how that can suffocate creativity.

Tony Wilson read out his funny and entertaining poem entitled Each Peach Pear Figs, which included the names of the shortlisted authors in all the categories. Was a buzz to be included on that list!

I was moved by the honesty of Michael Camilleri who talked about the financial challenges of trying to make a living out of being creative, and the importance of having a supportive partner. I would guess that’s true for a lot of us in this industry – I don’t think anyone is in it for the money, and the number of authors who can support themselves as full-time writers without outside assistance or doing other work on the side must be few. I definitely feel very lucky to have the time and space to be able to explore my ideas and write. Michael also talked about the first time someone said they thought he had real talent, and how much that meant to him – it brought tears to my eyes.

It was incredible to be on a stage that also held legends such as Libby Gleeson (who was later awarded the Nan Chauncy award) and Freya Blackwood (who took out THREE awards – a record, apparently).

Enormous, heartfelt thanks to the CBCA for all the work that goes into organising these annual awards and to the judges (apparently they had to read upwards of 400 books!). Being an honour book is truly the highlight of my writing career to date.